Andrey Avinoff was an important Pittsburgh figure, known as both a scientist and an artist. At the Carnegie Museum of Natural History, he began as Associate Curator of Entomology in 1924. He became director of the museum in 1926 and stayed until retiring in 1945. He was invested in Botany Hall, working personally to raise money for diorama construction, and was a close colleague of Otto Jennings, Curator of Botany. They published a book together, Wildflowers of Western Pennsylvania and the Upper Ohio Basin in 1953.

Carl Beato is listed as an assistant to Ottmar F. von Fuehrer from 1935-1939, and then as Preparator and Sculptor in Vertebrate Paleontology in the 1940s. He helped the von Fuehrers with the Arizona Desert Group.

Anna Dierdorf worked as an assistant in taxidermy at CMNH from 1908 through the 1930s. She was Assistant Preparator of Plants, Taxidermy and Preparation from 1937-1938, and Preparatorial Assistant in Botany from 1939 until her retirement in 1942. She was not credited as consistently as Hanne von Fuehrer, but likely helped create the plants for the first five dioramas, in addition to parts of dioramas all over the museum.

Ottmar von Fuehrer was born in Sarajevo, studied in Vienna and came to Pittsburgh in 1922. He studied art at Carnegie Tech and then worked at the museum from 1926 until 1965, as preparator and artist. His work is all over the museum, and he is especially remembered for the giant Tyrannosaurus Rex that used to loom over the hall of dinosaurs. You can see another one of his paintings just outside Botany Hall, on the wall in between the staircases. He painted the backgrounds for all of the groups in Botany Hall except the forest and the herb garden. He and Hanne von Fuehrer married in 1926, and they worked as a team on many museum projects. 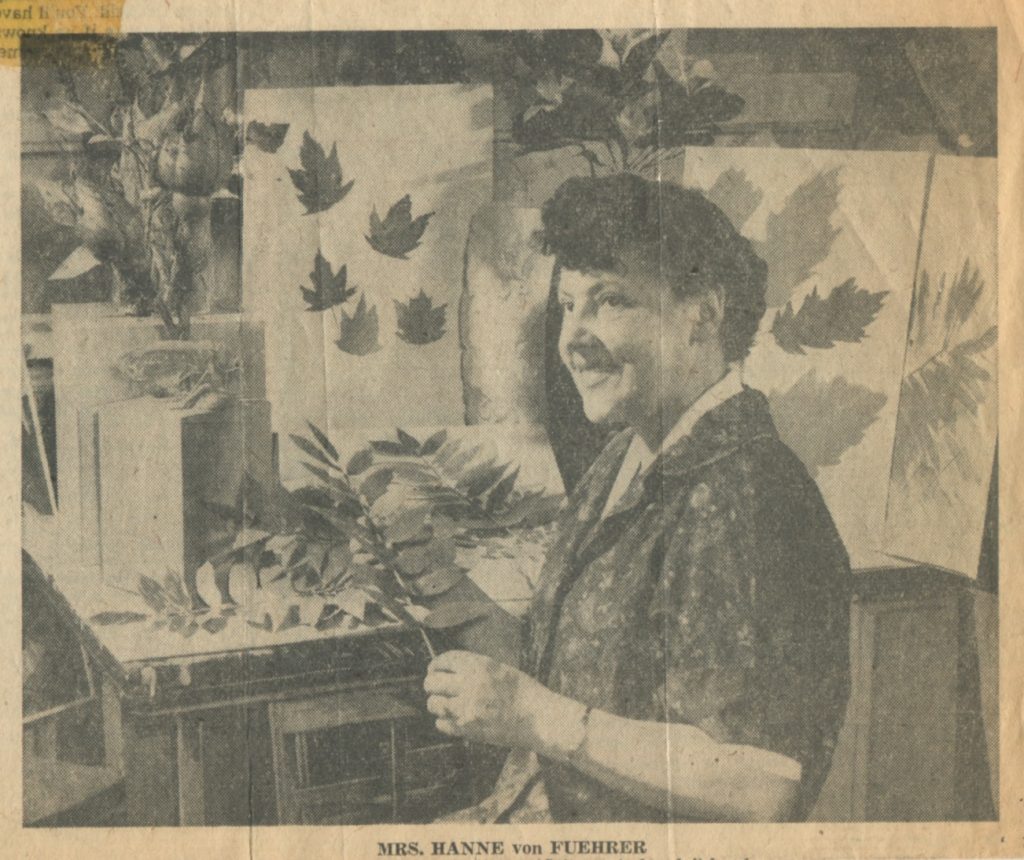 Hanne von Fuehrer was originally from Heidelberg, Germany, and worked at the museum from 1926 until 1965 as preparator and artist. She was in charge of creating the plants for the first five dioramas, likely with the help of Anna Dierdorf and Carl Beato. This picture (above) was included in a 1960 article entitled “Wax Works…Artistic Wonders” that was published in The Pittsburgh Press.

Leroy K. Henry began as an assistant in Botany to Otto Jennings in 1925. He became Assistant Curator in 1937, and Curator in 1947. He retired in 1972 but continued to participate as Curator Emeritus in the construction of the forest diorama.

Rachel Hunt was a collector of botanical illustration, a horticultural expert, and a prominent Pittsburgh philanthropist. She and her husband Roy Hunt founded the Hunt Institute for Botanical Documentation in 1961 to house her extensive collection. Hunt knew Andrey Avinoff well and in the 1920s helped to secure funding for building dioramas in her role as president of the Garden Club of Allegheny County.

Patrick Martin worked in the Exhibits department from 1971 until 2000 and was responsible for many of the dioramas and taxidermy all over the museum. He worked with Clifford Morrow and Elizabeth Niedringhaus to design and install the Hardwood Forest and Kitchen Herb dioramas.

Clifford Morrow trained at the Art Institute of Pittsburgh. He was Staff Artist in Exhibits from 1951 to 1959, Chief of Special Exhibits Staff from 1960-1965, and Chief of Exhibits 1966-1969. He become a Curator of Exhibit Design and Production in 1970, Chief Curator in 1979, and Chairman in 1983, retiring in 1987. He played a large role in the design of the forest and herb dioramas in the 1970s, and designed other exhibits such as the Hall of Gems and Minerals and Polar World.

Graham Netting began at the museum in 1923 as a student assistant in Ornithology. He became Assistant Curator in 1929, Curator in 1932, Assistant Director of the museum in 1949, and Director from 1953 to 1975. His specialization was in herpetology. He oversaw the production of the three later dioramas. He also helped to create the Powdermill Nature Reserve, and documented bird-banding activities and landscapes at the reserve between the 1960s and 70s.

Elizabeth Niedringhaus began at the museum in the Exhibits department in 1963. She became Assistant Preparator in 1964, and Preparator in 1965, working at the museum until 1976. She created the plants for the three later dioramas, devising new techniques which earned her international attention. She recruited volunteers to help produce the plants from Chatham College. She published a book titled Second Nature about her practice.

Dorothy L. Pearth began her career at the museum in 1942 as Secretary in Herpetology. She moved over to Botany in 1974, working for Leroy K. Henry, and then became Assistant Curator in 1951. She became Associate Curator in 1973 upon his retirement, and was in this position until she retired in 1978 to Associate Curator Emeritus. She worked on the later three dioramas, pushing for the completion of Jennings’ original vision and coming up with a new concept for the most recent diorama, built in 1976. She had a Bachelor of Science degree from the University of Pittsburgh, and wrote several articles for the Carnegie Magazine about the activities of the Botany section as well as two books: Additions to the Flowering Plants of Western Pennsylvania and The Flora of Westmoreland County Pennsylvania.

Nancy Perkins worked at the museum as Artist, Scientific Illustrator, and Preparator from 1976 until 1998. She painted the background for the Kitchen Herb Garden diorama in 1976.

Daniel Riccobon was hired just after he finished art school to paint the background of the Hemlock-Hardwood Forest Group which opened in 1973. He was given photographs to work from that the team had taken on their expedition to the Tionesta Tract.